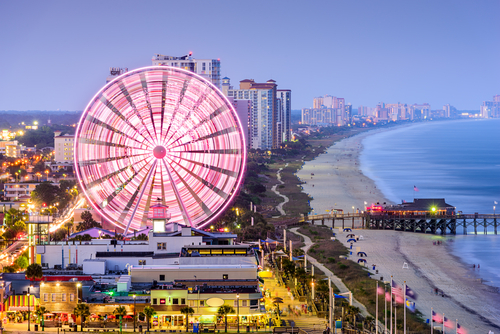 The Grand Strand area has significant treasures dating back to the 1600s, but the significance of the town of Myrtle Beach and its immediate surrounding areas truly began at the turn of the 20th Century. The Burroughs & Collins Company receives a charter to build the Conway Seashore Railroad from the South Carolina General Assembly. The line was completed around the turn of the century connecting Conway to the beach. Side bar: Previously, the area was known as Long Bay, Withers and New Town, for history buffs, the name “Myrtle Beach” comes from the wax myrtle, an abundant local shrub, and was chosen in a name-the-town contest in 1900.

The Seaside Inn, the area’s first hotel, is built at the turn of the century. At that time, oceanfront lots sold for $25 (WOW!), and buyers received an extra lot if they built a house valued at $500 or more (BIG WOW!). The Pavilion (torn down in 2012) was built as part of the Seaside Inn property.

After The Great Depression, it became a prosperous time for much of the United States, family beach vacations became the great escape, and things began popping up around the Grand Strand. Landmarks such as piers, hotels and golf courses came to be, the framework for a thriving resort town was laid for Myrtle Beach during the next few decades.

In the 1950s, as the country’s wealth and love of leisure expanded, rapid growth continued in the Myrtle Beach area with the addition of many tourism-based businesses including hotels, campgrounds, golf courses, shopping and restaurants. And the area hosted the birth of the Carolina Shag.

Since then, it has never looked back. Today, Myrtle Beach is a well-known destination for vacationers and residents from around the country, Canada and abroad. The City of Myrtle Beach is still a popular beach destination along the Grand Strand, a 60-mile stretch of natural beauty on South Carolina’s northeastern coast. More than 30,000 permanent residents and 16 millions of visitors each year enjoy the wide sandy beaches, the warm weather and an incredible range of entertainment, nightlife, golf, shopping, dining and live theatre.
Come experience all that Myrtle Beach has to offer and you may be surprised that you may never want to leave!